Creating a Compelling Argument for Computer Science in Lifelong Learning

In the early 1990s, when researchers at MIT worked to develop programmable bricks for children, they were guided by Papert’s notion that creating and constructing create deeper understanding [Resnick, 1993]. Of course, most of Papert’s work has been bound up in the idea that the computer could be “the children’s machine” [emphasis mine].

President Obama recently asked every young American to learn computer science because “it’s important for our country’s future.” According to promotional materials from code. org (the group associated with Hour of Code), the main impe- tus behind learning computer science is career development. In order to “stay on the cutting edge” students must learn how to create new technologies, not just use them. 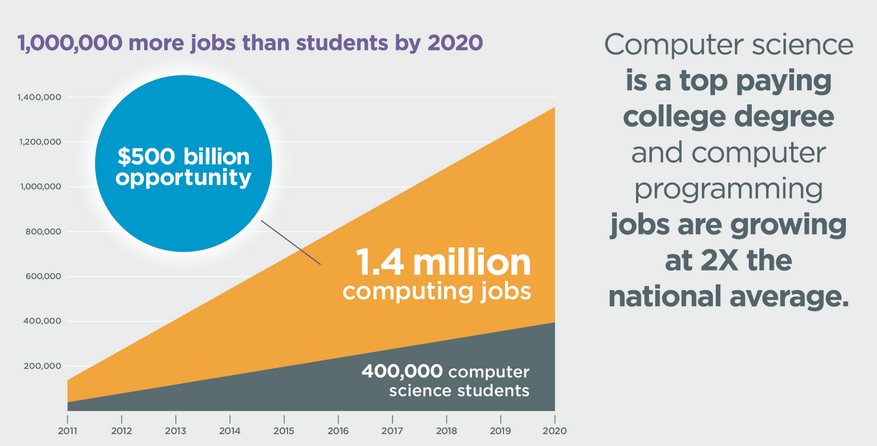 Computer science is promoted as path to a better job and economic prosperity, not as a fun, creative endeavor.According to this line of thinking, for older adults no longer on the job market, there are few “practical” reasons go beyond basic computer literacy. When I suggested to participants that computer programming activities might help keep their minds sharp, most agreed that the benefits would be similar to completing puzzles or other logic games. I also emphasized that for some people, creating physical computing projects is a hobby in itself, while for others, it can be a way to extend craft-based hobbies or creative interactive art. Most users verbally agreed with this statement.

One of Knowles’ principles of adult learning states that a direct need can increase motivation [Knowles, 1980]. Although the surveys indicated that a majority of the participants would be interested in continuing with an electronic toolkit and recommending it to another older adult, in group discus- sions, many stated that they had no real “need” to learn how to use a microcontroller.

While computer literacy training could be considered a necessity, computer science activities (like electronic construction kits) should be reframed as creative, enriching, playful pursuits.

Older users were very tentative with the materials. Several participants expressed concerns about breaking or damaging the components and most were initially reluctant to bend the wires until I assured them it was fine to do so. (“I was afraid I was going to break one of those little things off.”)

The fear of breaking the computer is common in studies with older adults [Mayhorn, 2004]. In this age group, the feeling of anxiety is often the biggest barrier to learning [Delahaye, 2008] and the unfamiliar nature of the kit may cause some stress. Studies suggest that training can ease these anxieties by creating positive experiences for participants to build on [Cjaza et al, 1993]. In this introductory workshop there was little to build on, but a sec- ond or third session could have more easily incorporated free form activities. One participant noted during the last few minutes of the workshop, “I guess you can’t be too afraid to really bend these wires.” Presumably, in follow-up workshop, she would have been less reluctant to manipulate the materials.

In the initial workshops, participants were encouraged to follow the booklet in a more self-directed fashion, but they did not touch the kits without direct instruction. Ultimately, as the facilitator, I played a larger role than I had anticipated: I became more of a teacher than a coach, particularly in the first fifteen minutes of each workshop, when key concepts were introduced. The participants wanted to engage with me and ask questions—almost asking permission to complete an operation—rather than immerse themselves in exploration. This led to some productive group discussions about physical computing, but fewer individual discoveries by the participants.

A strict constructivist toolkit framework is not the right fit for an older adult audience. Several studies suggest that students who attended schools steeped in an instructivist tradition (in South East Asia and China) had difficulty learning in constructivist setting [Wright & Lander, 2003 and Catterick, 2007]. The subjects of this study may have been formally edu- cated in an era where instructivist approaches were the norm and the teachers were clear authority figures. Situating the participants in a group did help spark organic conversations and allowed the facilitator to play more of a coaching role, particularly when two users shared one computer.

Although many of the participants looked to the facilitator for help when problems arose, just as many worked to troubleshoot their own problems. When they did need assistance, I tried to emphasize the large role of debugging (and trial and error) in programming and physical computing. I also em- phasized that I was not testing them or judging their perfor- mance. Still, most users expressed a desire “get it right” the first time.

One study suggests that, among older adult learners over 55, the 55 to 65 age group prefers to “learn by doing,” while the older age groups both prefer to learn by watching and listen- ing [Truluck, 1999]. In these workshops, the participants in all age groups definitely preferred to watch me demonstrate (whether on the actual materials or with a larger visual aid) before attempting any new procedures. They did, however, extrapolate from familiar actions like inserting the color-cod- ed wires into the breadboard to complete a circuit. Not every step was explained as we went along, but the users were initially reluctant to experiment.

The Role of Life Experience

Would a rich variety of life experiences help older adults learn how to build a simple gadget? According to their survey responses, the participants were divided on this issue. The question was specific to the skills and hobbies they had listed in the pre-study survey. At least two participants indicated that certain hobbies would likely be helpful, but they weren’t activities in which they had personal experience.

This question suggests that around half of the participants had difficulty making a connection between their existing skills and experience and the act of using the kit. In post-workshop discussion, three participants specifically not- ed their surprise that they were able to complete the activi- ties. Prior knowledge, however, certainly helped every single user complete the simple circuit at the beginning of the work- shop. Every participant was familiar with such a circuit and used that knowledge to light the LED. They also used their skills with text editing software to use the Arduino program on the laptop.

Users were far less familiar with circuitry than expected. Only one subject, a man in the 65-70 age group, reported a strong familiarity with electronic components. I assumed the users would have a stronger base of knowledge in this area and more of a willingness to “poke around” inside their appliances. Their reaction to this question, on the survey and in discussion, was mixed. 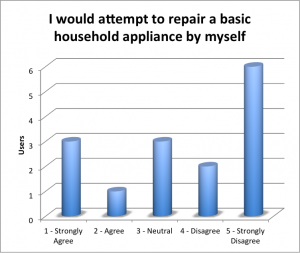 Eight of the participants disagreed or strongly disagreed that they would tinker with a broken appliance. Despite the fact that only one participant claimed to be familiar with electronic components in the previous question, four different participants indicated their willingness to attempt an appliance repair. Of those four people, three had reported no familiarity with electronic components (the fourth selected the “neutral” option). 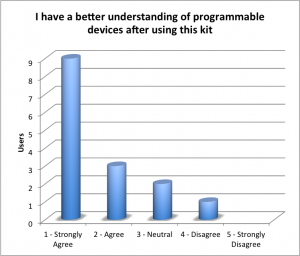 This response could indicate that these users did not see electronics knowledge as necessary to attempt a repair. In discussion, the users made clear distinctions between their ability to use a personal computer and their lack of familiar with circuits and basic electronics. In each discussion, participants cited computer literacy as a “necessity” for everyone, while electronics were a topic for a much smaller group of experts. Yet, 80% of participants agreed that they had a better understanding of programmable devices after the workshop and, in discussion, half of the participants noted that they had a better sense of how their gadgets work. Based on their experience making an interactive object, they constructed their own mental model of a system.

If this kit and workshop had been more firmly rooted in a constructivist framework, participants would have received a selection of materials without direct instruction. The sandbox format works well with learners who are eager to “dig in” to new materials. The older adults, however, preferred to listen and discuss rather than explore the kits through trial and error. They were extremely careful, checking with the facil- itator and each other before taking new steps. Participants constructed new knowledge through the process of making, despite their cautious approach. The results of these work- shops suggest that, when working with unfamiliar materials, older adults respond to a combination of instructionist and constructivist methods.

Thinking Outside the Brick is a masters project by Kate Farina (Georgia Tech, Digital Media, M.S., 2014), advised by Prof. Michael Nitsche. The project aims to introduce senior citizens to physical computing through a modified toolkit and workshop. This site features information about the toolkit and workshop, including assets to create your own, as well as insights from user testing that took place in Winter, 2014.